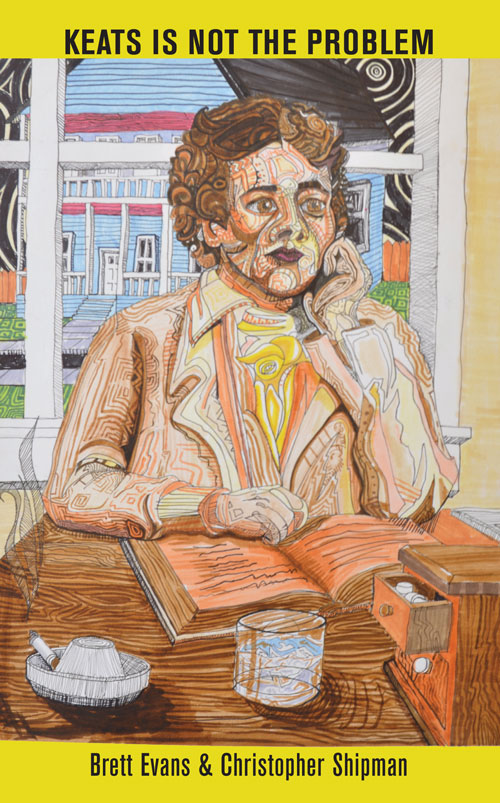 Next Thursday, February 22, the eve of the anniversary of the death of John Keats, will mark the launch of Keats Is Not the Problem, a collaborative poem by Chris Shipman and Brett Evans, at the famous Dogfish Reading Series. Even if you have to fly in from New York or California or Uruguay, you should plan on attending this event, which promises to be as much a party as a reading, with refreshments to make "The Eve of St. Agnes" seem Wordsworthian by comparison. Rodger Kamenetz says of this book: "EvansShipman have merged to form a durable romantic monster with one big clear voice, scarifying at times as poetic monsters should be, but also amiable amidst the ruins of New Orleans." Come merge with the monster and celebrate with us.

In honor of this auspicious event, we offer a little taste of the book below. You can also listen to EvansShipman reading from the book and talking to yours truly about it on The Writer's Retreat at WRBH.

If you can't make it to the launch, pick up a copy of the book from our website for half price, today only.

Two from Keats Is Not the Problem

Aging in America (When the Music’s Not Quite Over)

before the apocalypse hit

Who Killed the World?

on the celestial seasonings

and what about geriatric

roaches who just age out

hearts on the fire

psst— Spring is about youthiness

but once I read with the poet

he among younger poets

reading about sorrows of the flesh

even though we poets are supposed

Aging in America is one thing

Dying in Paris is another

be roundly where it’s at

or just flying a kite on a field

all this shit that killed us

there are no pacifiers

who made this place

start all over again

1Scenes from a Rain Country

3Hope on the Fly