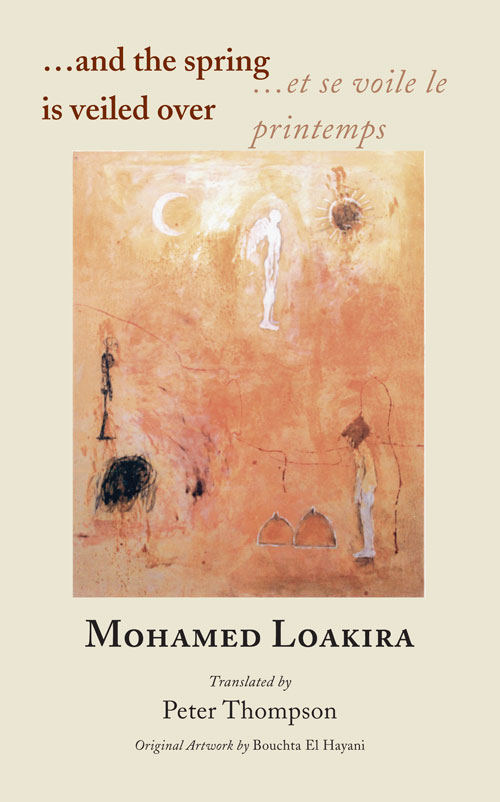 of his earliest publications Mohamed Loakira wrote: "The founding space of [my] predilection for writing was, without question, the Jamaa el Fna in Marrakech. This is where, as a child, I learned not to dissociate the voices, rhythms, colors, smells of country cuisine." Those who have visited the Fna (main square) and souks of Marrakech can attest to the social intensity of the experience. The crush of food and textile vendors hawking their wares in Arabic, French and Spanish, snake charmers and tattoo artists (I was naive tourist enough to have a henna pattern applied to my bald head) is a feast of sensations, which might help to explain Loakira's desire to "decompartmentalise modes of writing, seeking fusion, cohabitation and dialogue between the various forms of expression, including my poetry, Moroccan painting, music and the aesthetics of silence." And one might add politics to these modes of writing, as Loakira has always been active in post-colonial politics in both Morocco and France.

Among Loakira's numerous books of poetry and novels, Diálogos is proud to be the first to bring a complete volume of his poems into English with publication of Peter Thompson's translation of …and the spring is veiled over (…et se voile le printemps). The Spring of the title is, at one level, the wave of demonstrations and revolts that swept North Africa and the Middle East in 2010 that came to be called Arab Spring, and the book is both a celebration of the revolutionary spirit and hope that swept the region for that brief moment and a lament for its ultimate failure.

Could this be dawn’s birth, a cloud-piercing,
tinted by flashes at the wide transoms.
A dream of what’s possible, so it seems, set free
and a route reshaped for sharing?
…
[or]
Might it be bitter miscarriage,
insomnia’s rough-draft
or simply more of current events? (25)

The book pivots on actual or implied or's, as the alternative conjunction infects every poem like the turn of an English sonnet.

Today we present one of the poems (untitled, pages 52-3 in the text) read in both English and French by Peter Thompson. And, today only, we are offering the book at half price.

from …and the spring is veiled over (53)

Or am I forced to endow excess,
assassinate my hopes’ dream of rebirth,
strangling the future with both hands…

Or await in my retiring
the echo of the explosion
and powder the bloodletting with salt that has lost its savor.

There is only unlawful taking, flagellations, amputations,
abductions, ransoms,
devastation, blood and fire.

And may the litany of heresies drone on!

I've been reading Francophone writers of Northern Africa lately and thought to recommend a few that might serve as background to those which have appeared and are appearing from Diálogos. Recent Francophone literature from and of Northern Africa—Algeria, Morocco, Tunisia—ranks as some of the most ambitious, incisive and artistically interesting literary work of the past half century, though it is little known in the English-speaking world. Many thanks to Peter Thompson who got me started in this investigation.

One author I would recommend to everyone is Assia Djebar, and of her many books especially Fantasia: An Algerian Calvalcade. In this work that defies easy classification as fiction, nonfiction, or even poetry, Djebar collages together a sequence of narratives that include factual histories, Djebar's own lyrical memoirs, excerpts from diaries of both French and Algerian actors, and fictionalized narratives from various personae, to trace the recent history of Algeria. Beginning with the French blockade of Algiers in 1830, Fantasia traces the country's conquest and suppression by the French, which precipitated an almost constant state of war that culminated in the Algerian Revolution in 1954. Both a stylistic, theoretical and political tour-de-force, Fantasia, in the excellent translation by Dorothy S. Blair, is essential reading for anyone with an interest in the historical forces that are shaping North Africa, the Mideast and Europe today.

I also just read Abdelwahab Meddeb's Talismano. Meddeb grew up in Tunis. 10 years old when Tunisia gained independence, he benefited from an education that taught him both French and Arabic classics, and apparently everything in between. Talismano abounds with cultural references from all sides of the Mediterranean; indeed, he treats the coastline of Mare Nostrum as a single country, almost as a single city. With his vast erudition and wide-ranging travels he is equally at home in Tunis or Rome or Marseilles or Athens, with Jewish alchemists, Greek classicists and Koranic scholars, with prostitutes, priests, magicians and scientists. He punctuates his dense, incantatory prose with an array of allusions and hints buried in a syntax as labyrinthine as the medinas of Marrakesh or back streets of Rome. Talismano, in fact, is a novel of back streets, perhaps of all back streets, for as the author or narrator (one is never certain which) is wandering the alleys of one city he can turn a corner and suddenly be in another, as a chance encounter in  Tunis or Algiers will remind him of Rome or Paris and the narrative will simply follow. Meddeb is as bawdy as Henry Miller, as ambitious as Joyce, as visionary as Rimbaud and as wily as Proust, though likely he'll first remind you of Celine. Jane Kuntz's translation of this challenging work is, too, a stunning achievement.

Another I want to mention is Tattooed Memory, by Abdelkébir Khatibi, recently translated by Peter Thompson and released from Editions L'Harmattan. Like the other two books I've mentioned here, Tattooed Memory is hard to classify. Is it a novel, a memoir, a theoretical work or even a long poem? Amazon refers to it as a novel, but if we take that term as is commonly taken in the book business in the US, as a form in which the matters of first importance are "plot" and "character," in which language is considered best when it is "invisible" and not even worthy of critical attention, I would have to say that Tattooed Memory could be almost anything but that. As Thompson says in the Translator's Introduction:

For Khatibi, born in Morocco but educated at the Sorbonne, whose dissertation was entitled Le Roman maghrébin (The Maghrebin Novel), language can never be invisible. To speak French is always to speak the language of force, the language that the colonizers forced on his parents and on him. Thus his memoir will be a memoir of language, of how his language came to reside in him as translation, from the very beginning, from the first pronoun to the last period of the theoretical discourse. Tattoed Memory is a kind of Derridean memoir, a memoir that does not have recourse to le mot juste Flaubert imagined to be his goal. It is a memoir in which every word is, in fact, unjust.

Still to come, for me, several writers of the generation before Djebar, Meddeb and Khatibi, like Kateb Yacine and Driss Chraïbi, and the lesser known (ie less translated) Albert Memmi and Mohammed Dib.

My hope is that the work of Nabile Farès, Youssouf Amine Elalamy, Abdelkader Djemaï and Mohamed Loakira, herein, makes some contribution to this most vital branch of post-colonial literature. As with Khatibi, Djebar and Meddeb, it is difficult to classify their work as fiction or nonfiction or poetry. While Farès and Loakira utilize the convention of the line, Exile: Women's Turn and ...and the spring is veiled over are not collections of discreet poems but series composing unified narratives. Conversely, Elalamy's use of anaphora and lyrical refrains in Nomad Love makes that work read as much like a poem as a novel, and the same can be said of Farès' novel, Exile and Helplessness, and the two novellas that comprise Djemaï's Father / Son.

1The Wisdom of Ashes & Standing at the Gate

2Scenes from a Rain Country

4Hope on the Fly